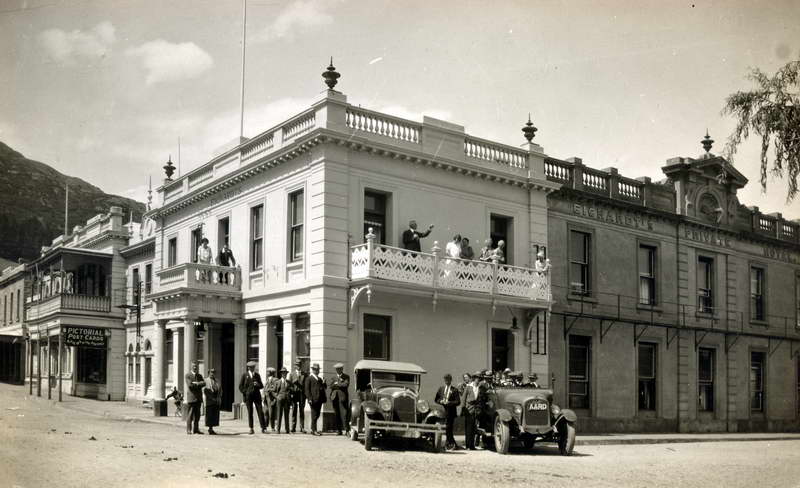 The history of Eichardt’s was born as a result of the rich vein of gold, which drew many prospectors, opportunists and downright optimists from around the globe to the shores of Lake Wakatipu.

The quest for pastoral land brought William Gilbert Rees to the shores of Lake Wakatipu in 1859 when he built a homestead on the lakefront and erected a woolshed on the site now occupied by Eichardt’s Hotel.

When gold was discovered in the nearby Shotover River, Rees found himself at the centre of a gold rush – his homestead declared an official goldfield and the main business area developed around the station. The entrepreneurial Rees quickly turned to the hotel keeping business, the woolshed was given a wooden façade and turned into a hotel and named the Queen’s Arms.

In early 1866, Rees entered into partnership with Albert Eichardt who went on to become the sole proprietor of the hotel by 1869. Eichardt renamed the hotel Eichardt’s Queen’s Arms Hotel, but during his time there, it came to be known simply as Eichardt’s Private Hotel where he catered mostly for tourists as the tenor of the town evolved from a mining settlement to something more permanent.

Eichardt’s is a significant local landmark, and is listed as a Category 2 historic place by the Historic Places Trust. Eichardt’s today accommodates discerning travellers from around the globe but it’s history endures.

The expansion project completed in 2016 saw the excavation of the site next door which originally housed the Eichardt’s stables. Many items of archaeological interest were retrieved from the site where a striking building now stands, accommodating additional Lake View Suites, Queenstown’s premier dining destination The Grille by Eichardt’s, The Penthouse by Eichardt’s, as well as luxury shopping brands.